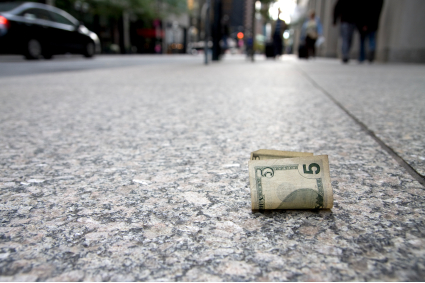 Could you tell me if someone finds a big sum of money on the road, he has no idea who it belongs to. Is it correct to keep it for own use. Will this create any karmic action? Or maybe, this could be due to his past karmic reaction that he found this money?

Mataji, after understanding this basic principle of karma, you will be able to answer it:

Work done as a sacriﬁce for Viṣṇu has to be performed; otherwise work causes bondage in this material world. Therefore, O son of Kuntī, perform your prescribed duties for His satisfaction, and in that way you will always remain free from bondage. (BG 3.9)

“The wealth of the world actually belongs to Kṛṣṇa, and every living entity, man and animal, has the birthright to use God’s property for his maintenance. When one takes more than his maintenance requires – be he a capitalist or a communist – he is a thief, and as such he is liable to be punished by the laws of nature. The wealth of the world should be used for the welfare of all living entities, for that is the plan of Mother Nature. Everyone has the right to live by utilizing the wealth of the Lord. When people learn the art of scientiﬁcally utilizing the Lord’s property, they will no longer encroach upon one another’s rights. Then an ideal society can be formed.

The basic principle for such a spiritual society is stated in the ﬁrst mantra of Śrī Īśopaniṣad:

“Everything animate or inanimate that is within the universe is controlled and owned by the Lord. One should therefore accept only those things necessary for himself, which are set aside as his quota, and should not accept other things, knowing well to whom they belong.”

Therefore, its very important to learn this science in order to know what real welfare is. Only then can we utilize everything perfectly.

The ultimate understanding of this science is as Srila Prabhupada explained – Everything belongs to Krishna.

If I use it for my enjoyment, then I am a thief, meant to be punished (This is karma). If I think, “I am not the enjoyer, let me renounce the money!” that is also foolishness for how can one renounce that which never belonged to that person?

However, If used for Krishna’s enjoyment it’s akarma (boundless action). In fact not only me but the person to whom the money so-called belongs, will also benefit tremendously. Akarma or devotional service will rather destroy all the past karmic reactions!

Therefore, one should know the Original proprietor.

Then, next duty is to apply the knowledge and preach. I daily encounter people who think by working hard like asses honestly (honest asses), one will be liberated. While they are working hard for little grass thinking of liberation, its pitiable that they are indeed preparing themselves to become an ass or so in their next birth. This is the result of a spiritually illiterate society, with the wrong understanding of karma.

But in real world, I won’t steal and run away such money. I shall definitely seek out the person who may be in dire need of that money. If found then I shall request for some donation from him for his benefit. If not, then I shall see how I may ‘smartly’ do the right thing for the mass out of illiteracy may consider me a criminal.

Also, in one of the lectures Srila Gurudeva was giving an insider secret of a spiritual master, to a devotee who is a sales manager of a company with many karmis working under him: The spiritual master sees every one as a part and parcel of Krishna who are covered devotees now. The spiritual master sees, how shall I engage them in such a way that majority of their energy is transferred to Krishna. Therefore we must feed them prashadam. Or accept what they may offer and see how to donate it to Krishna. Accept their love or appreciation. When the boss appreciates the devotee for his work, that is also offered to Krishna!
For this one needs to be very strong in sadhana, for all the karmic reactions being directed to Krishna will be directed through him as the medium.

It would be good to donate the money to the local Iskcon Temple.

hare krishna: the question is whether to return the money or use it for you. if you cannot find the owner, you have to use it for spreading krishna concisous as using for personal bnefits will create karmic reactions. your undeserving servant. manain

From the book ‘Nectar of Instruction’:

If a hundred dollar bill is lying on the street, someone may pick it up and put it in his pocket. Such a man is not honest. Another man may see the money and decide to let it remain there, thinking that he should not touch another’s property. Although this second man does not steal the money for his own purposes, he is unaware of its proper use. The third man who sees the hundred-dollar bill may pick it up, find the man who lost it and deliver it to him. This man does not steal the money to spend for himself, nor does he neglect it and let it lie in the street. By taking it and delivering it to the man who has lost it, this man is both honest and wise.

Since the wealth of the world actually belongs to Krsna, so the money can be donated to nearest ISKCON so that it can be best used for the welfare of all living entities.

This happened to me too, found 100 EUR on the road. I offered those money to Srila Gurudeva on Vyasa Puja. I do not know if it was the perfect way to do…

Please accept my humble obeisances,
All glories to Srila Gurudeva and Srimati Gurumataji,

All glories to Srila Prabhupada.

I had received a very nice teaching, regarding this from Her Grace Shyamamohini Mataji in Toronto. Everything belongs to Krishna.
We all went to book distribution once. On our way back, in one place we saw many coins lying on ground. We ask nearby people if it was their money. Everyone said NO. Then Mataji said that pick up the money. It is Krishna’s money, let us return it back to him. So we will picked up the coins and deposited in the temple.

The lesson I learned was that if I come across something that does not belong to me, then I should try to use it in service of Krishna or give it to someone who can use it for service, if I am not fully capable of doing that. Keeping something for myself, which is not mine, is certainly an attachment. That’s too a bad kind of attachment.

Also if we donate that in service of Sri Krishna, than we are also helping that person who lost something. As his earning has been used in service for Sri Krishna. That is good for him.

Thanks so much for all your answers.

Rathin prabhu, the last point you wrote is excellent. I never thought of it. Thank you 🙂

Thanks so much for all your answers.

Please subscribe to daily inspirational emails from His Grace Sriman Sankarshan Das Adhikari (Writings and lectures archived at sda-archives.com), written fresh every day from his travels around the world sharing the highest spiritual knowledge with everyone. Sign up now at www.backtohome.com