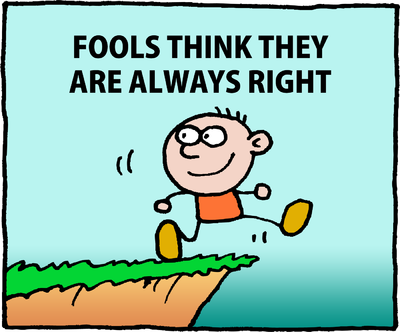 Whether you’re a doctor, or a policeman, a teacher, or a nurse, a lawyer, an engineer, a manger, or a businesswoman, an actress, or a playwright, a mathematician, or a musician… no matter which field you are in, you are bound to encounter fools.

You know, the kind of individuals, who haven’t put in a tenth of the effort you have, who don’t know a hundredth about a subject you know so well. These individuals might try to give you unsolicited advice, they might try to correct you, or end up inventing new ways of being foolish.

But let me focus on the fools I meet often while out there sharing the spiritual knowledge with others… there are the souls who will suddenly feel the urge to enlighten you on their ignorance.

When I was younger and more naive, I actually tried to reason with these people. I tried to help them, to serve them, to hear them out. But that didn’t go so well. I ended up really bruised and battered (metaphorically speaking), and after all that trouble, they didn’t end up any better than before.

Mūrkhāya upadeśa hi prakopāya na śāntaye (Hitopadeśa 3.4). If you teach lesson to a foolish person, he’ll be simply angry. He’ll not take your lesson. How it is so? Payaḥ-pānaṁ bhujaṅgānāṁ kevalaṁ viṣa-vardhanam. If you keep a snake and if you want to make friendly behavior with him, that “My dear snake, don’t bite any more. I’ll give you milk and banana. You eat here and stay here nicely,” he’ll not . . . His poison will increase, and one day he will . . .

So I decided to follow this advice from one of my teachers… “The first rule in dealing with fools and fanatics… DON’T”.

And even though a fool will surely insist on having the last word, hurl that last insult, write that last hateful email, the best thing in spiritual life, even life in general is, to just let them go. Even if they end up thinking you are a fool!