Evolution is a fact. But not the way it is commonly understood… How to understand evolution scientifically?

You may have heard about Darwin’s theory of natural selection… yes, where the claim is that one species evolved into another species because the fittest who evolved survived and the others died off, thereby creating a natural evolution of species just sort of accidentally and randomly. It is in line with the magical wishful thinking of the Big Bang.

But according to the Vedic scripture all 8.4 Million species are created by the arrangement of God. 400,000 of those species are human in nature, and the remain 8 million are sub-human. 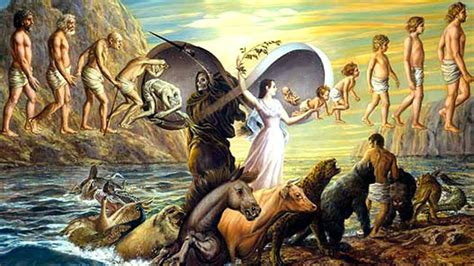 Some species may be visible at some times, and other species may be present at other times. So what determines whether there are any specimens of any given species are actually on a planet at any given time?

Karma! Karma is the law action and reaction – every action has an equal and opposite reaction, that is the law of Karma. This most basic law of nature drives the circumstances of a living entities trajectory in the material world… simply put, certain deeds are classified “karma” or deeds that bring pleasing reactions, and certain deeds are classified “vikarma” or deeds that bring unpleasant reactions. Karma and Vikarma is only accrued in human forms of life, the sub-human species are simply living our their karma – the tiger suffers no reaction for killing a deer but a human does.

Having gone through all the miserable, hellish conditions and having passed in a regular order through the lowest forms of animal life prior to human birth, and having thus been purged of his sins, one is reborn again as a human being on this earth.

After transmigrating through the millions of different species, we get a human life. What we do in our present human life determines our future trajectory.

Of course, trying to piece together the effects of the law of karma is a fool’s errand, because here’s something – let’s say you have one seed – one karmic action. That seed sprouts, grows into a tree, flowers, and fructifies – each fruit contains many more seeds… those result in more trees and more and more and more. Pretty soon, you don’t know where you started and why you’re enjoying or suffering. All sorts of apparently anomalous phenomena occur, and people ask questions like “why do bad things happen to good people”. In the material world, no one is really fully innocent. We all came here by our own free will, due to the original sin of trying to displace God after all.

There is one kind of action, called “akarma” which can be loosely translated as “inaction in action”…

The intricacies of action are very hard to understand. Therefore one should know properly what action is, what forbidden action is and what inaction is.

One who sees inaction in action and action in inaction is intelligent among men, and he is in the transcendental position, although engaged in all sorts of activities.

Statements like this can be mysterious and confusing, and they did end up confusing a lot of western scholars who studied the Bhagavad Gita without the guidance of the disciplic succession, a bona fide Guru.

But it is quite easy to understand with the context, go ahead and click on the link to BG 4.18 and you will get a crystal clear explanation. Basically, you might think you are inactive, but you could be accumulating karmic reactions just by your breathing… but there is a way to do everything so that not only are there no karmic reactions but your existing karmic reactions are burned away…

Coming back to the speculative idea that somehow or other one organism adapted and evolved into another species, and that the fossil record is to be taken as proof is fallacious. The fossil record, is at best, a conjecture.

Because the fossil record simply represents certain events or accidents depending on whose viewpoint you are looking at – some hapless animal got caught in some clay that solidified to rock preserving the skeleton as a fossil, and just because this didn’t happen a billion years before or after doesn’t necessarily give us the time when that species was around. A fossil is essentially like a little child pointing and clicking a camera randomly – you can’t decide what exactly happened that day just from the photos. A lot of room for error.

A great book on this subject is Nature’s IQ by by Balaz Hornyansk and Istvan Tasi.

The introduction to the book reads “It is not at all surprising that insects behave like insects, birds behave like birds, and mammals behave like mammals. They execute most of their intricate behavior in a predetermined, instinctive manner. But how do they know when and how they should act? Where did the intelligence that is manifested in nature come from? Can the current view be true, that inert matter (lacking consciousness) somehow acquired intelligence over the course of a vast span of time? Darwin’s theory of evolution is widely accepted as the explanation for the varieties of life. Evolutionists attempt to explain the origin of behavioral patterns by gradual modifications of more simple behavior forms. But when we try to explain complex animal behavior this way, it becomes impossible! Nature’s IQ invites the reader to investigate an alternative explanation. Is it possible that our world reflects, in many different ways, a supernatural intelligence that has applied its own infinitely ingenious solutions to create the living world?”

One of Darwin’s ideas is that some fortunate specimens of a particular species developed a particular advantage that helped them survive while their peers perished due to the lack of that advantage.

The key idea is that for example, it is conjectured that a giraffe needed a long neck so it could eat the leaves from trees that were very tall and thus have an advantage over those animals that depend on grass and other short plants… one day, a short-necked ancestor of a giraffe developed a slightly longer neck, and its descendants developed longer and longer necks… but the authors make an argument like, OK, what advantage did the giraffe ancestor with a neck only slightly longer than its previous generation have? How could that change continue in the absence of any tangible advantage? What about more complex instincts and behaviours? What about the intelligence that many animals exhibit?

Such examples abound in nature… Michael Cremo writes in his foreword… “These complex behaviors involve many behavioral steps, linked in specific sequences. Without all the parts of the behavior being present in proper sequence, the behavior would not be executed. We can thus say that not only biological form but biological behavior can be irreducibly complex. That means these behaviors cannot have arisen in the step by step fashion that evolution requires. Thus biological behavior also provides evidence of intelligent design.”

In other words, the theory of evolution of species is not much more than mental speculation combined with healthy doses of conjecture. It is the dogma of conjecture.

Another great book is Rethinking Darwin, by Leif Jensen.

What can we do then? We can evolve back to a higher consciousness with our efforts and lots of mercy.

For those who are engaged in the devotional service of the Supreme Personality of Godhead, all sinful reactions, whether fructified, in the stock, or in the form of a seed, gradually vanish.

Quotation from the Padma Purana in purport of https://vedabase.io/en/library/bg/9/2/

Here is real science. You can know this, follow the process of Bhakti, Loving Devotional Service to the Supreme, and go back home. It is a repeatable process. Countless have done it. You can too. Dear Spirit Soul, you are already perfect in your original state. Over countless lifetimes, you have devolved from your original perfection to a state which is an embarrassment to your true identity. Wake up! Know yourself! Be yourself! Go back home to the spiritual realm where you belong! I pray to serve you on your journey back home, that is why I exist. Ask me how!